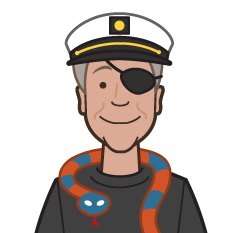 Filling in for his cousin Ted rrrreading the Poem of the Day.

My cousin Arrrrthur is a puppy dog—the sweetest ex-pirate you will ever meet. He sounds gruff, but under all the “arrrrrs” is a total softie. Just please don’t tell him I said that.

Arrrrthur is a bad pirate turned good. He used to be known as “Pretty-Vicious-GrayBeard the Pirate” and was once the most feared pirate on any ocean, or at least in his bathtub. As he will quickly tell you, he actually never wanted to be a pirate. He only did it because that’s what his dad did, and he gave Arrrrthur a job offer he couldn’t refuse. What Arrrrthur really wanted was to be in the Arrrrmy for a while, and then become an Arrrrchitect. But he was attracted by the gold and treasure that comes with pirating, so he stayed a bloodthirsty pirate until ten years ago when he first read some of my poems.

Arrrrrthur claims that poetry—especially funny poems—turned him away from ruthless mayhem. “There’s plenty of riches enough for me in poetry,” he’ll tell you, after a few chocolate milks. “It’s way better than buried treasure, and is much easier to find. Just go to the library, for heaven’s sake. You don’t even have to dig for it.”

The only thing Arrrrthur misses about being a pirate, I think, are the wild ice cream parties, the diving competitions when people pretended to walk the plank, and the sword fights when everyone tried to be mean-sounding and used a lot of fake blood to make a big mess. Because he was the captain, he never had to clean up the messes he made, or clean his room.

One warning: don’t ever arrrrgue with Arrrrthur. He likes being right. And he is, most of the time.