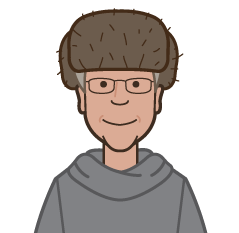 Lover of Life and Funny Poems

He likes ‘em all. (He loves anything cold.)

It's always better to let Boris tell his own story…

(That’s Russian for “Hello to all my fine American friends!”

“I am Boris Vladimir Rhymski-Korsakov Scheuski, Russian cousin of famous American poet for children, Ted Scheu. About me there is not much to tell, compared to famous cousin, Ted Scheu, but let me share a bitski aboutski meski.

I live most of year in city of Irkutsk, in central Siberia. Irkutsk is city next to really big, really deep, really cold, really beautiful lake—Lake Baikal. Irkutsk is gray cold city. I like cold. Lake Baikal, as you may know, has more water in it than any lake in world. We are proud of this. It is also mostly frozen water—at least on top of lake—for most of year. At least it seems that way. I like frozen. That’s why I love ice cream and American popsicles. Yumski!

What else can I say? OK, one more thing. I come to Moscow, capital of Russia, by Trans-Siberian Railroad train, as often as can, to enjoy big city. Someday I will come to America and meet you, okayski? We’ll have fun time.